You are here: Home / Archives for Hand of an Angel

Hand of an Angel

The Hand of an Angel
by Mark Brownless

In the beginning I was pretty upset with Tom for taking on such a dangerous experiment with a wife and two children at home. I thought he was reckless because I’d never to anything that may take me away from my wife and daughter. 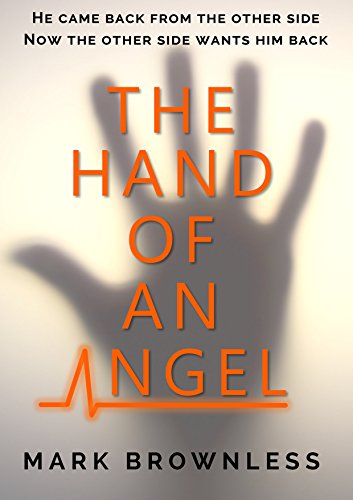 The Hand of an Angel

I stopped chewing tobacco so I would have more time with my daughter. It was my 19th attempt at quitting over a 30 year span. It’s been 3 years and I still crave it, but I don’t give in. That’s why I was mad at Tom, he was taking an unnecessary risk.

But then his wife, Sarah, was OK with it so I eased off on him a bit. The experiment is killing Tom for an extended period of time, then bringing him back to life so he could mimic a “near-death” experience. Risky for sure.

I love this book because it kept me on my toes. Every time I thought I had it figured out, he changed the game. Twists and turns abound! I gave up and just let the story unfold.

My favorite character has to be Bob – not because he’s the only American in the story. I’m not that shallow! Bob starts out as an antagonist. He  probably enjoys watching Tom squirm, although, he might not admit it. They become friends and partners in the experiment. I like Bob because he’s me, a shoot-from-the-hip, matter of fact guy. He pulls no punches, telling you exactly what you need to know…or what the thinks you need to know. He’s not perfect, he could be wrong.

Near-death experiences have always fascinated me, though not to the same extent as Tom! I’m not about to kill myself to find out what it’s like. Science be damned 🙂
Tom is certainly dedicated to his work, nobody can take that away from him!

Mark Brownless is very descriptive with his scenes. He brings you into the story very well. It’s easy to imagine the setting and the characters within.

I can’t really say much more without giving details away so I’ll leave it right here. I want to tell you my favorite part of the book, but I don’t do spoilers.

I enjoyed reading Hand of an Angel as it kept me on my toes and always wondering what was going to happen next.

Who will like this book? Anyone who enjoys thrillers and especially medical thrillers. Anyone who’s ever wondered what happens after we die will also enjoy reading this book. It’s not the definitive answer – it’s fiction, after all. But it will give you something to think about and there are medical descriptions about death and what happens when we die. Mark also gives details on what happens when we die and come back. So you’ll be entertained and learn a few new things.

All Amazon links are affiliate links. As an Amazon Associate, I earn from qualifying purchases. You aren’t charged anything extra.